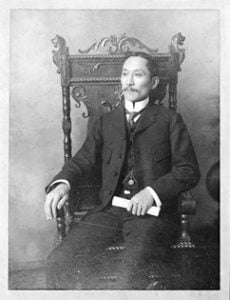 The petition can now be signed online at: https://petitions.ourcommons.ca/en/Petition/Details?Petition=e-3960

The Bank of Canada is currently undergoing a process to redesign the Canadian $5 banknote, including selecting a new Canadian to replace Prime Minister Laurier as the face of the bill and as part of that process, a shortlist of eight candidates was drawn from over 600 nominees.

As the next step of the process, the Minister of Finance will select from the shortlist the new face of the $5 bill. Among those eight extraordinary Canadians shortlisted is Won Alexander Cumyow.

Although Won Alexander Cumyow may not be a household name to many Canadians, his story represents the struggle, opportunity, and hope that has shaped the Canadian identity. Born in British Columbia in 1861, Mr. Won was the first Chinese-Canadian to be born in present-day Canada. Despite being ambitious and skilled, Won Cumyow faced considerable racism and discrimination throughout his life. Despite being formally trained as a lawyer, Mr. Won was denied the ability to write the bar exam and practice law because he was ethnic Chinese.

Yet Mr. Won never allowed discrimination to stop him from working to build a more inclusive and welcoming Canada.

Mr. Won overcame substantial adversity and went on to lead a long and distinguished career as a court interpreter and became a leader of the early Chinese-Canadian community. He was at the forefront in the fight against the Chinese Head Tax, disenfranchisement of Chinese Canadians, and racial segregation.

After decades fighting for the right to vote, Won was finally able to cast his ballot in 1949, at age 88, following the repeal of the Chinese Exclusion Act in 1947.

We recognize this as an important opportunity to showcase to Canadians, newcomers to Canada, and the entire world the rich history of Canada’s immigrant heritage– heritage that formed the foundation of our country and which is woven into the fabric of our society today.

We also know that one of the root causes of anti-Asian racism in Canada is a lack of understanding and appreciation for the contributions of Asian-Canadians throughout our country’s history.

We believe that featuring Won Alexander Cumyow on the redesigned $5 banknote is a significant and important opportunity to combat anti-Asian racism.

Please download and print Petition to the Minister of Finance.

Fill in your address and signature (any Canadian citizen, permanent resident, international student, and the resident who is 14 years old or older can fill this petition).

Please mail or send the completed form to the CPAC office mailbox before 5pm on April 20. The address is CPAC, 4150 Finch Ave E, Scarborough ON M1S 3T9

Thank you for your support!