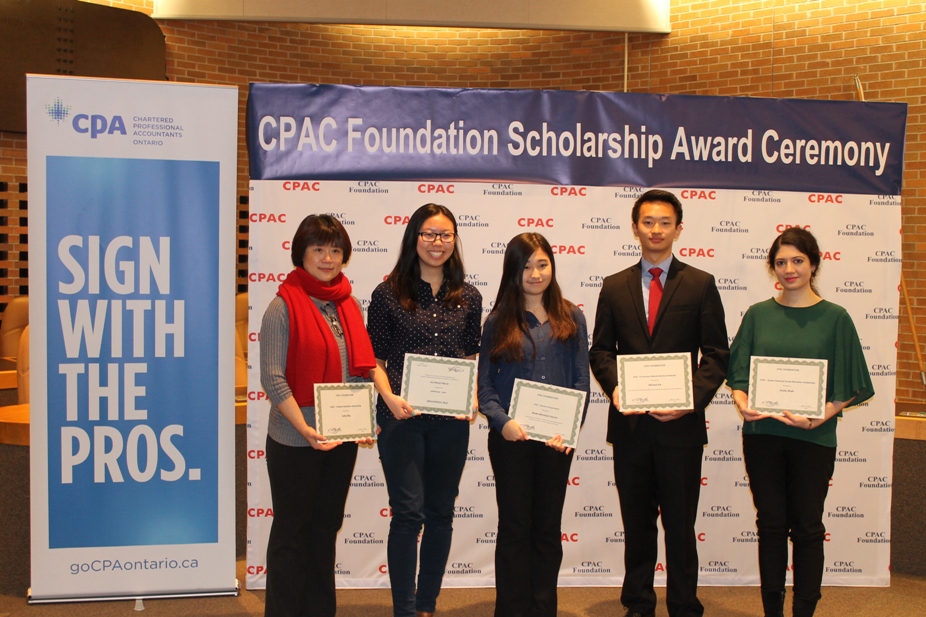 Five outstanding high school and post-secondary students were awarded scholarships at CPAC Foundation’s Annual Scholarship Award Ceremony on March 5th, 2016 at the North York Civic Centre. The scholarships are awarded to recognize students for their academic achievements and community contributions, while also encouraging them to pursue higher education.

The winner of the $3,000 CPAC-TDIMM Scholarship was McMaster University’s Michael Xie, a third year Health Sciences student. Driven by a desire to positively impact those around him, Michael has taken great initiative to act as a leader both academically and in his community. At the university, Michael has worked as a Teaching Assistant while also volunteering as an Exam-Aid Instructor and a statistics tutor. Giving back to the Hamilton community at large, Michael serves as a Canadian Blood Services Clinic Leader, helping coordinate blood donation clinics and also assisting geriatric patients at St. Peter’s Hospital. Along with his community involvement, Michael has taken on a full and demanding course load and has been able to confidently maintain a GPA of 3.99.

Two outstanding high school students, Akeda Sayram and Vicky Xu, were presented with the $1,000 CPAC Awards. Both of them have shown academic excellence and exceptional leadership potentials. Akeda Sayram, currently a grade 12 student at SATEC@W.A. Porter Collegiate Institute is an inspired and effective fundraiser who has dedicated 2000 hours of service to her community and volunteered in multiple non-profit organizations in senior leadership positions. Akeda founded Accessible Education Association Ontario, a youth-led organization devoted to creating educational opportunities for children and youth in underprivileged areas. Partnered with Volunteer for the Visayans, Akeda and her group raised more than $18,000 and adopted two schools in the Philippines for one school year.

Vicky Xu is also a grade 12 student and part of the TOPS program at Marc Garneau Collegiate Institute. She has a knack for research and has shown her talents at the Toronto Science Fair by incorporating bromelain from pineapple waste into modern detergents, which won gold at the event and invited to present at the Ontario Universities Symposium and World Congress on Medical Physic and Biomedical Engineering. She co-founded a local organization called Community Surf, an organization that serves as a platform to bring community members together. She has also co-founded Undercover Kindness to spread joy and kindness across the city.

The two Education Scholarships, valued at $3,000 each, were awarded to Seneca College’s Echo Wu and Queens University’s Aisha Shah. A single parent and the sole provider for her two teenage children, Echo confidently takes on the challenges of being a parent as well as a full time mature student. Through hard work and persistence, she has achieved a near perfect GPA of 4.0 during the past two semesters. In addition to her academic achievements, Echo actively assists international students from China through a mentorship program, helping them successfully transition to the Canadian education system.

Aisha Shah is a master’s student in Finance at Queen’s University’s Smith School of Business. She completed her undergraduate program in Pakistan. As an immigrant from a conservative background where girls are not encouraged to pursue post graduate education, she is the first women in her family to enter a master’s program. While academic achievement is very important, Aisha believes contributing to society defines what type of person she is. She has served as the Director of Career Development in her program’s student council while also tutoring high school students.

“This year, we received applications from over sixty brilliant students from across the country.   The Selection Committee had a difficult task, but ultimately decided to award five individuals based on their combined academic excellence and community involvement,” remarked Richard Lim, President of CPAC Foundation.  “CPAC Foundation has given out 206 monetary awards worth $246,000 in the past fifteen years.  We would like to thank all of our sponsors and donors for their generous and continued support that has allowed us to fulfill our commitment in this regard. We would especially like to thank CPA Ontario, the diamond sponsor of the 2015 CPAC Foundation Scholarship Award Ceremony,” said President Lim.

“CPA Ontario is proud to be part of CPAC Foundation’s Annual Scholarship Award Ceremony‎,” said Carmen Jacques, Student Recruitment Manager with CPA Ontario’s Student Recruitment Team. “It is inspiring to see so many of these talented young students and to hear about their many accomplishments. These are exactly the type of young people that our province needs to ensure our collective future success.”