On December 8th, 2016, Bill 79, Nanjing Massacre Commemorative Day Act, 2016, passed second reading debate in the Ontario Legislature. From there, communities across Ontario have mobilized to gather signatures for a petition in support of Bill 79. Even with a tremendous response of over 60,000 signatures and counting, petitions do not guarantee that a Private Member’s Bill will pass in the Legislature. At this time, if you support Bill 79, you need to take the following actions:

Original signed petitions can be returned to CPAC office by April 30 at:

2.     Make an appointment to meet or write to  your local MPP

Raise awareness on Bill 79 by meeting with your local MPP.

You can find and contact your local MPP here: 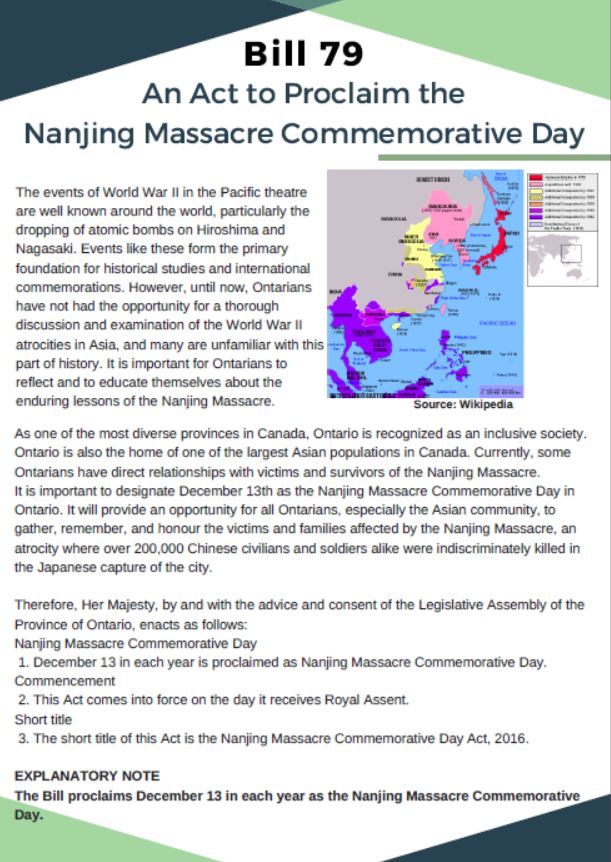 Sign to support Bill 79 Petition at CPAC before April 30, 2017 by Using the New Form

Whereas the events in Asian countries during World War II are not well-known;

Whereas Ontarians have not had an opportunity for a thorough discussion and examination of the World War II atrocities in Asia;

Whereas Ontarians are unfamiliar with the World War II atrocities in Asia;

Whereas Ontario is recognized as an inclusive society;

Whereas Ontario is the home to one of the largest Asian populations in Canada, with over 2.6 million in 2011;[1]

Whereas some Ontarians have direct relationships with victims and survivors of the Nanjing Massacre, whose stories are untold;

Whereas the Nanjing Massacre was an atrocity with over 200,000 Chinese civilians and soldiers alike were indiscriminately killed, and tens of thousands of women were sexually assaulted, in the Japanese capture of the city;[2]

Whereas December 13, 2017, marks the 80th anniversary of the Nanjing Massacre;

Whereas designating December 13th in each year as the Nanjing Massacre Commemorative Day in Ontario will provide an opportunity for all Ontarians, especially the Asian community, to gather, remember, and honour the victims and families affected by the Nanjing Massacre.

We the undersigned petition the Legislative Assembly of Ontario as follows:

Please ensure original signed copies of this petition are returned to the following address by April 30, 2017: CPAC, 4150 Finch Ave E, Scarborough ON M1S 3T9; or you can visit CPAC office directly to sign at the petition. CPAC office hours: Monday to Friday 10:00am-6:00pm.

Thank you for your great support!