CPAC Foundation Gives out $18,000 in Scholarships to Top Canadian Students 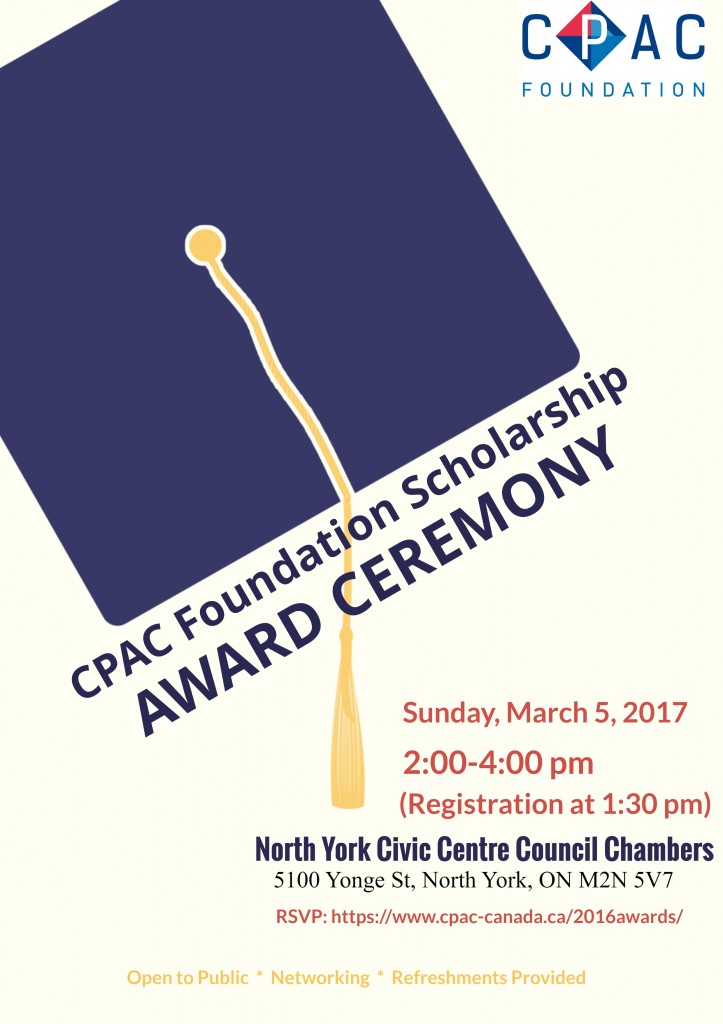 “The Selection Committee had a difficult task in choosing only ten individuals out of many worthy applications,” remarked Richard Lim, President of CPAC Foundation. “The recipients are picked based on their combined academic excellence and community involvement.”

There are six awards, one sponsored by Queen Financial Group, given to high school students with a combination of strong grades and dedicated volunteerism. Each award is worth $1000. The recipients include Aiken Chau from Mary Ward Catholic Secondary School, Co-President of his school’s DECA Chapter; Elaine Ke-Xin Liu at Don Mills Collegiate Institute, who works as a youth leader with St. John Ambulance; Emily Cross from Hammarskjold High School, the Regional Director of Sustainable Youth Canada’s Thunder Bay chapter; Kevin Zhang from Victoria Park Collegiate Institute, who worked with the Alzheimer Society of Toronto; Mokai Xu from Bayview Secondary School, one of 2016 Ontario Top Scholars and Director of Women in Computer Science Waterloo; and SongLing Wang from The Woodlands School, who is a Junior Executive on The Prefects.

The CPAC-TD Insurance Meloche Monnex Scholarship, worth $3000, is given to an accomplished post-secondary student with demonstrated leadership. Sari Ohsada, an Environmental Science and Global Development Studies student at Queen’s University, is given this honour for her work in social justice and climate change education.

The CPAC Special Scholarship, worth $3000, is given to a student that played an active and leading role in a meaningful project to the community. The recipient, Yiqiao Chen of Leaside High School, is awarded for her work in running Vision Exchange, a program matching blind Chinese individuals with English-speaking mentors.

The total value of scholarships and awards given out this year is $18,000.

An award ceremony celebrating the achievements of these young individuals will be held on Sunday, March 5, 2017 at the North York Civic Centre’s Council Chamber and is open to the public. The ten scholarship and award recipients will share their inspiring stories based on their accomplishments.

“It’s a great opportunity for students and parents to share their experiences and learn from one another,” says Andi Shi, Executive Director of the Foundation.

In addition to the award recipients sharing their stories, the CPAC Foundation Scholarship and Award Ceremony will feature two keynote speeches. Ms Helen Cao will share her experiences as a parent to two accomplished children, one of whom chose to pursue a PHD at Massachusetts Institute of Technology (MIT) over offers from other schools including Stanford, Harvard and Cambridge and the other a six- year record holding World Cube Competition Women Champion studying at the Dalhousie University Schulich School of Law. Audiences will learn about her role in fostering her children’s success with personal accounts of the relationship she shares with them.

Another keynote speech entitled “Educate, Appreciate, Dominate” will be presented by Ms Marilyn Flanagan. Ms Flanagan will speak on the importance of education in shaping our values, the role that scholarships play in supporting that education, and, the resultant opportunities. Ms Flanagan’s career comprises many executive roles including the Past President of Textualis, Senior Vice President of Business Operations at IFDS, Senior Vice President of National Sales and Service for TD Meloche Monnex, and guest lecturer at McGill University Faculty of Management. Audience will surely benefit from her vast management experience and advanced leadership skills.

The Foundation continues to support CPAC in carrying out its mission of helping internationally trained professionals and tradespeople to obtain licenses, find jobs, advance their careers, develop leadership skills, and integrate into Canadian society.

For its own initiatives, the Foundation organizes activities that provide educational information to parents and students. It also provides scholarships and bursaries to secondary and post-secondary students who have demonstrated social responsibility and a determination to pursue academic excellence.

Since 2000, the CPAC Foundation has given out more than 200 scholarships and bursaries with a total value of $246,000. It has also built two schools in poverty and disaster stricken areas in China.