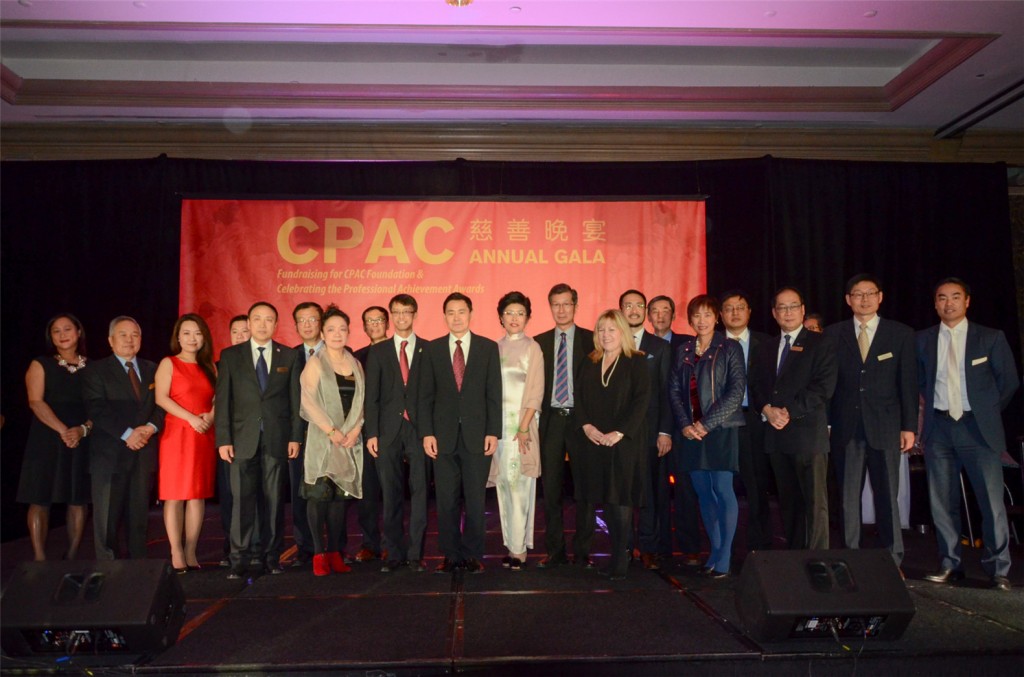 November 30, TORONTO –CPAC and CPAC Foundation co-hosted its Annual Gala 2015 last night at the Sheraton Parkway Toronto North Hotel to raise funds for their charitable work within the immigrant community and celebrate the accomplishments of outstanding immigrant professionals.

The funds raised through the event will help improve the programs and services provided by CPAC and CPAC Foundation. “Thanks to the support of all levels of government, our sponsors, and each and every one present this evening, we are able to make a difference in the lives of thousands of newcomers to Canada,” said Mrs. Margaret Yang, President of CPAC in her welcome speech. “Over the past 23 years, we have served tens of thousands of immigrant professionals, helping them reach their career goals and integrate into the Canadian society.” The funds raised last night will also be used to support CPAC’s initiatives in promoting education by providing scholarships and bursaries to students and in cultivating leadership among immigrant professionals through its training programs.

One of the evening’s highlights was the presentation of the CPAC Professional Achievement Award, which recognizes the achievements of outstanding immigrant individuals who have overcome various barriers and made incredible strides in their professional careers. This year’s winner is Dr. Kue Young, Dean of the School of Public Health at the University of Alberta. Dr. Young is a recognized authority in the field of Aboriginal public health. He has worked as a primary care physician, health administrator, and academic researcher in indigenous communities in northern Canada and other circumpolar regions.

True to its promise, CPAC Annual Gala 2015 proved to be a worthy networking event where community, business and political leaders mingled with guests over cocktail and throughout the evening. New for 2015, CPAC provided “upgraded tickets” to interested young professionals that allowed them to sit at the corporate tables of their choice and network with executives and other guests.

The Sunday night gala was successful thanks in part to the generous support of the event’s Presenting Sponsor, CPA Ontario, the Diamond Sponsor, RBC Royal Bank of Canada, and the Platinum sponsor Harmony Village-Sheppard.

Dr. Young has published over 150 scientific articles and seven academic books. His contribution to medicine has won him many academic honours and awards, among which are the Senior Investigator award of the Canadian Institutes of Health Research, the induction as a Fellow of the Canadian Academy of Health Sciences in 2009, and the appointment as a Member of the Order of Canada in 2010 for his lifetime contributions to improving the health of Aboriginal people.