Announced on January 18, Dr. Heyu Ni, a Fellow of Canadian Academy of Health Sciences (CAHS), is the recipient of the 2021 CIHR-ICRH Distinguished Lecturer/Canadian Society of Atherosclerosis, Thrombosis and Vascular Biology (CSATVB) Scientific Excellence Award in Blood and Blood Vessel Sciences. This prestigious award aims to recognize an individual’s outstanding contribution to the advancement of blood and/or blood vessel sciences both in Canada and internationally, including the impact of his/her research; impact of his/her research to clinical outcomes, new IP, or other important breakthroughs; his/her demonstrated strength and reputation; and the impact of his/her mentorship and training environment on the development of young scientists and other highly qualified personnel. 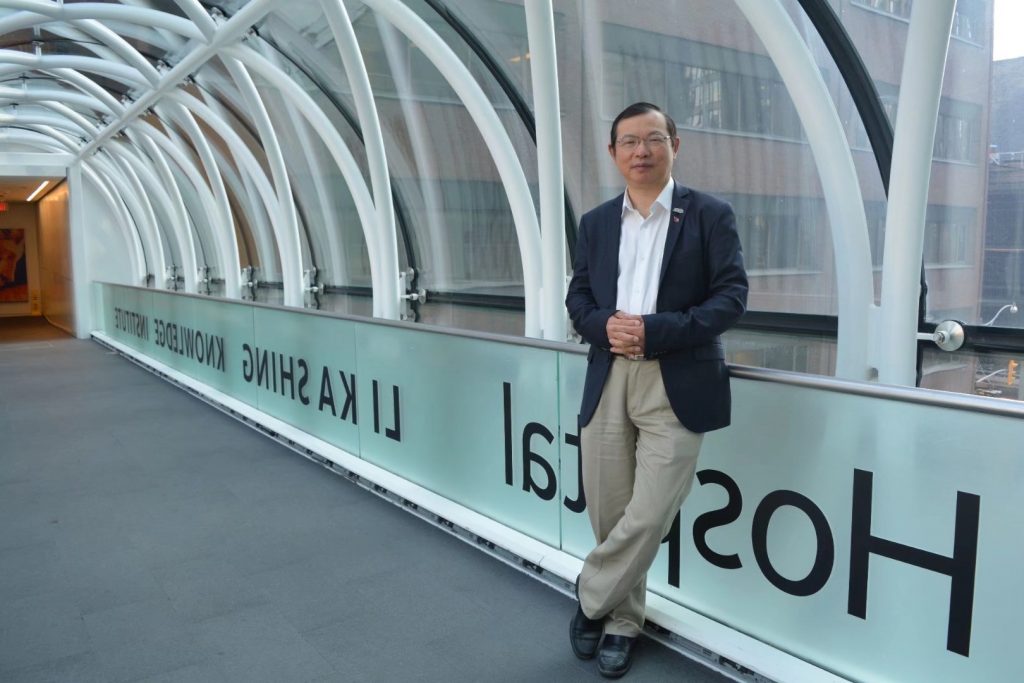 Dr. Heyu Ni is an internationally recognized leader and expert in blood sciences, vascular biology and immunology. Over the last 10 years, his Scopus rank has been 1st in platelet pathophysiology nationally, and 2nd within the areas of thrombosis and thrombocytopenia. Dr. Ni has an impressive record of scientific accomplishment. He has published >110 peer-reviewed original articles, 31 invited reviews, and 6 book chapters, with many in high impact journals, such as Blood(23), JCI(5), Nature series(6), Science series(1), PNAS(1), JEM(1), Circ Res(1), and Circulation(1) and JTH(10). He is the first or corresponding author for >90 publications, and has been cited >7220 times, with an h-index of 49 (Google Scholar). Nearly 50% of his publications appeared in the last five years, among them 14 high impact articles (7 in Blood, 4 in Nature series, one in each of Sci Transl Med, Diabetes, and JCI). This trajectory highlights Dr. Ni’s accelerating research program and his dedication to the advancement of blood sciences.

Dr. Ni’s research results and findings contributed significantly to our understanding of the fundamental mechanisms that underlie thrombosis and hemostasis. Dr. Ni developed the first intravital-microscopy-thrombosis model and identified fibrinogen/VWF-independent hemostasis/thrombosis – a paradigm shift in the field. He characterized fibronectin, vitronectin, P-selectin, Cadherin-6, CEACAM1, other blood/vessel proteins, and their interactions with platelet-receptors (e.g. β3 integrin and GPIba). He determined the integrin-PSI-domain as a therapeutic target, by identifying its thiol-isomerase-activity. Recently, he linked lipoprotein metabolism and cardiovascular diseases, by discovering that apolipoprotein A-IV is an endogenous-thrombosis-inhibitor. These discoveries significantly advance diagnosis, treatment and prevention of thrombotic and bleeding disorders. Dr. Ni developed the first animal model of fetal/neonatal alloimmune thrombocytopenia (FNAIT), and several models of autoimmune thrombocytopenia (ITP). He found that anti-GPIbα-mediated ITP occurs via a novel Fc-independent-pathway (platelet desialylation), which resists first-line therapies in patients. This platelet destruction occurs in the liver (not spleen), and can be treated with sialidase-inhibitors. Clinical trials with sialidase-inhibitors in Canada, China, Europe and Australia markedly impact ITP management worldwide. Dr. Ni found that maternal anti-GPIbα and anti-β3 responses damage placentas, leading to non-classical FNAIT (miscarriage), and that anti-angiogenesis is the key cause of bleeding in FNAIT. These discoveries provided diagnostic tools and therapies (e.g. IVIG), and also initiated one a prophylaxis (Antibody-Mediated-Immune-Suppression) trial in Europe.

Dr. Ni’s contributions to blood sciences field have been recognized by national and international organizations throughout his career. His expertise is sought by Canadian and international peer review committees, including CIHR, the Heart and Stroke Foundation of Canada, and the National Science and Engineering Research Council, New Frontiers in Research Fund, NIH (USA), the European Science Foundation, MRC (UK), NSFC (China), and the Ministry of Science & Technology (Israel). He holds a senior scientist position at the Canadian Blood Services Centre for Innovation, and he has secured continuous peer-reviewed grant funding since 2002, including a CIHR Foundation Grant. The CIHR Foundation grants are only awarded to the top 3-5% of investigators across Canada. Most recently, he was elected to the Canadian Academy of Health Sciences as a Fellow in 2020. This follows on three major recognitions Dr. Ni received in 2019: the Keenan Legacy Award for his outstanding scientific and leadership contributions, the Keating Award for manuscript paper of the year in Hematology, and the CPAC Professional Achievement Award.

Dr. Ni is the Platform Director for Hematology, Cancer, and Immunological Diseases within the KRCBS in Unity Health Toronto (formerly St. Michael’s hospital), where he leads 14 exceptional principal investigators. He promotes Canada-China collaborations as the President of the Canadian-Chinese Society of Thrombosis and Hemostasis. He is also the President of the Institute of Cardiovascular and Cancer Healthcare of America, a charitable organization that promotes innovative cardiovascular disease and cancer research. From 2016-2018, Dr. Ni was the President of Society of Chinese Bioscientists in America (SCBA) Toronto Chapter, which was among the three most active SCBA research communities in America. 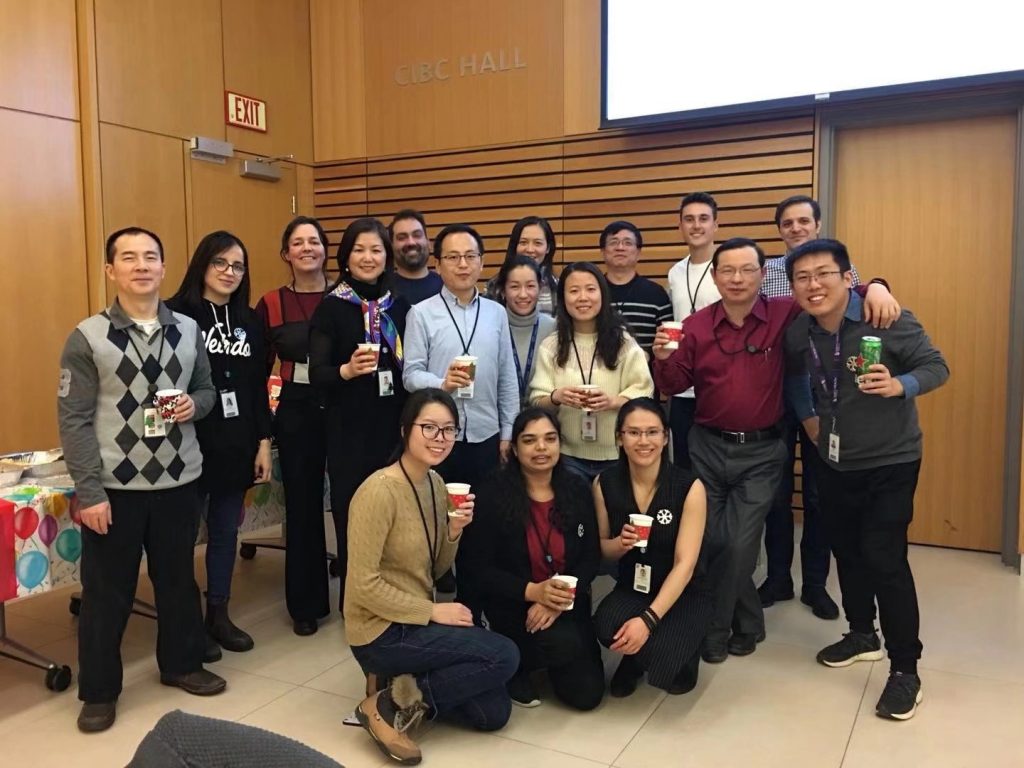 Dr. Ni is a national treasure in the area of blood/platelet physiology, who advances research and education at local, national and international levels. He is a Professor in the Department of Laboratory Medicine and Pathology, Department of Medicine, and Department of Physiology at the University of Toronto (U of T). His skills as an educator and researcher are highlighted by his undergraduate and graduate teaching awards, and his prolific research output. During his career to date, Dr. Ni has supervised or co-supervised 137 trainees, many of whom have gone on to become principal investigators/clinical doctors. This mentorship record illustrates Dr. Ni’s commitment to the next generation of scientists. Dr. Ni received teaching awards from the University of Toronto in 2012 and 2013 for undergraduate and graduate student education and mentorship, respectively. In 2016, he received the Kalman Kovacs Award for undergraduate teaching.

The award will be presented to the Dr. Heyu Ni at the 2021 Canadian Vascular and Lipid Summit, where Dr. Ni will deliver a Plenary talk named “Platelets in cardiovascular diseases and cancer: the future of the anti-platelet therapies”.

(The article and pictures are provided by Shanhai.)