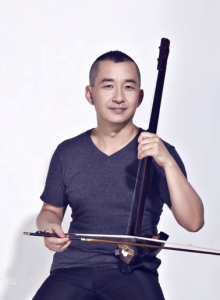 George Gao is a Gemini-award nominated, multi-talented musician who is a performer, composer, music producer and instrument inventor. He has dazzled the world with his virtuosic performance of the erhu and is the best-known and most innovative erhu player in the world today. His masterful rearrangements of the Carmen Fantasy and Gypsy Air for erhu have opened the eyes of the music world. His blending of folk, jazz, rock, new age, middle eastern, Indian, and Latin music into his compositions and performances has not only enriched and reinvigorated erhu music and inspired a wave of new styles of music-making, but also taken the traditional Chinese genre to the world. He has collaborated with numerous symphony orchestras and solo musicians around the globe.

Mr. Gao has written and arranged music for films, television productions and Broadway musicals, and collaborated with the 20-time Grammy award winning artist and composer, Brian Keane on a three-part documentary for PBS. His Erhu Capriccio series, No. 1-5, have been universally regarded as contemporary erhu classics, and frequently used in national and international erhu competitions.

Mr. Gao is also the inventor of a new type of erhu, erhu shaoqin, which produces a higher volume and better sound quality at the higher part of the strings.

In addition to composing and performing, George Gao has been a visiting professor at a number of universities, including the China Conservatory of Music, the National Taiwan University of Arts, and the Ogaki Women’s College in Japan.