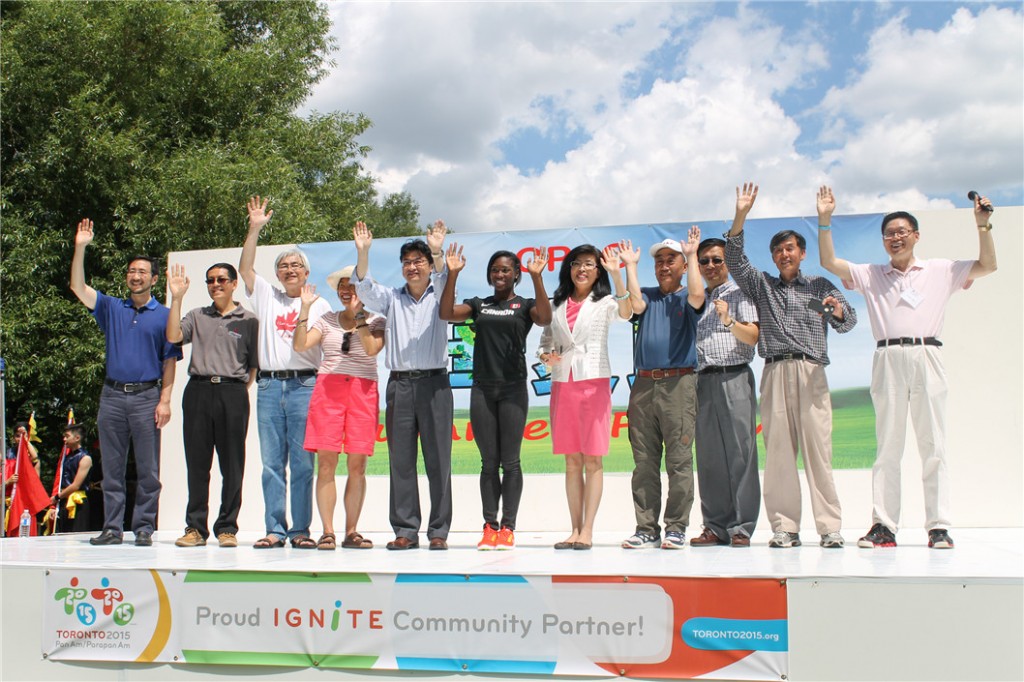 June 22, TORONTO – About five thousand people attended 12th CPAC Summer Festival at L’Amoreaux Park in Scarborough yesterday. As an IGNITE community partner, CPAC (Cross-cultural Professionals Association of Canada) celebrated TORONTO 2015 Pan Am/Parapan Am Games and showcased region Pan American sports and culture at their event. The fastest Canadian woman currently running, Pan Am athlete Khamica Bingham made an appearance, and brought TORONTO 2015 Pan Am/Parapan Am Games souvenirs.  She was a hit with the kids, as she encouraged them to be more actively involved in sports.

Khamica holds the Canadian youth record in the 100-metre sprint and is one of Canada’s young and upcoming sprint talents. She finished just .01 seconds out of a medal position at the 2012 IAAF World Junior Championships. At the 2013 World Championships, Khamica ran the anchor leg on the 4×100 metre relay team that broke the Canadian record and placed sixth overall.

Other highlights of the day included fun and games for the whole family. Five hours of performances included Caribbean drum and dance, folk dances, acrobatics, singing and martial arts. Kids were thrilled to play ‘Pin the Torch on PACHI’, ring toss, basketball shootout and learned to make bracelets, clay dolls, and Chinese paper cutting. There were loads of great prizes for participants, with over forty big lucky draw items given away, with a special draw for kids.

In addition, there were traditional delicacies from across the Caribbean and Asia Pacific shared among families, good bargains and special offers were found that were donated by many CPAC supporters.  The first 200 members to arrive received gift bags stuffed with giveaways.

“One of the objectives of CPAC is to help newcomers integrate into and contribute to Canadian society, as well as to provide culture and recreational services for them.  The CPAC Summer Festival is a celebration for the entire community with this in mind,” said Ms. Margaret Yang, President of CPAC at the opening ceremony, “With IGNITE’s support, this year’s Summer Festival became more energetic and meaningful!” Margaret continued.

The TORONTO 2015 Pan Am/Parapan Am Games Organizing Committee (TO2015) is tasked with managing and delivering the Games. It is working to bring some of the world’s best athletes and artists to the Greater Golden Horseshoe region, giving Ontarians a unique chance to be part of the action, and making the region a hub for sport.

The TORONTO 2015 Games are funded by the Government of Canada, the Province of Ontario, as well as Lead Partner CIBC and other partners and sponsors.

For more information about the Games, please visit TORONTO2015.org.